11 Funniest Boris Johnson Caricatures That Will Make Your Day

Throughout the history of United Kingdom, numerous prime ministers have changed, but none of them has been caricatured as much as Boris Johnson.

Whether because of his look or numerous strange statements - every caricature with him is hilarious. In this article you can see some of the most funniest. 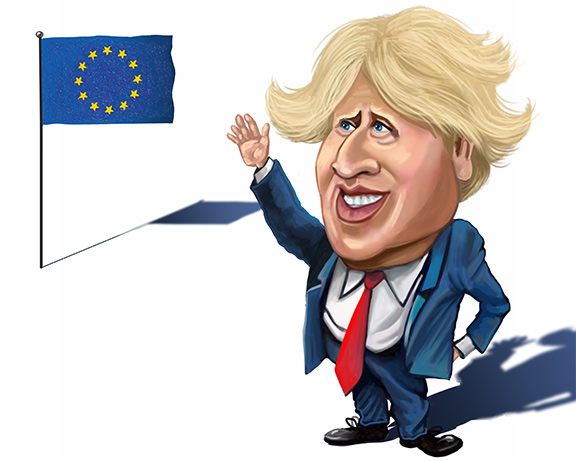 Sometimes you have to make big decisions if you want to achieve great things and go down in history - by bringing Brexit, Johnson has certainly achieved that.

Such a decision has brought a lot of good and bad changes, and only time will tell which side will prevail. 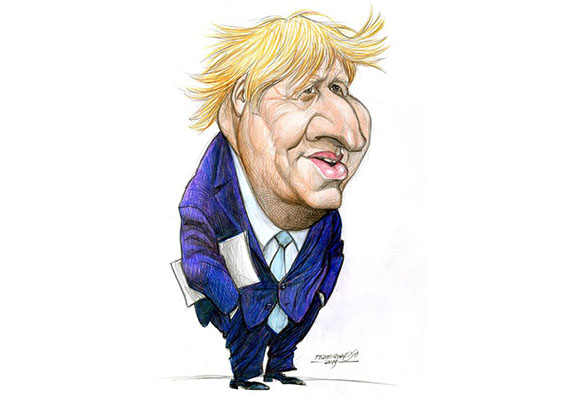 His long nose and messy hair are made for caricature, and when we add his messy clothes - then we can get one really funny caricature.

Whether it's because of his busy lifestyle or not - he definitely needs to work on his style. 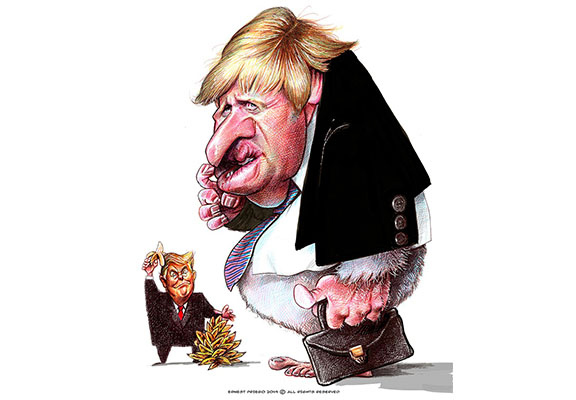 Many people call Boris British Trump, either because of their similar hairstyle or ideology - he doesn't like it.

However, relations between these two gentlemen were pretty good, until Donald Trump lost the election for the second presidential term and Boris sided with Biden. 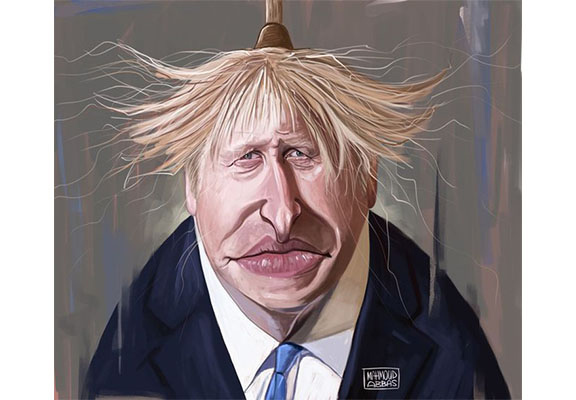 Every artist loves to draw Boris because of his look, and his hairstyle is the part they like to emphasize the most.

The funniest is probably the one where his hair is presented as an unkempt broom.

5. The Drinker by Peter King 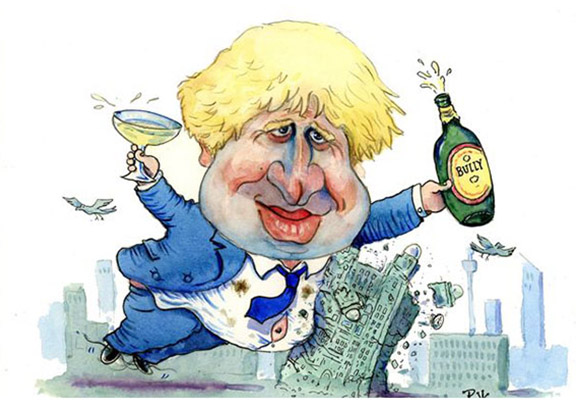 If anyone of the famous politicians loves to drink - that is definitely Boris Johnson.

Although he is the Prime Minister, he doesn't hide that he sometimes likes to drink and have fun. The only question is whether this bad habit will cost him his career or not. 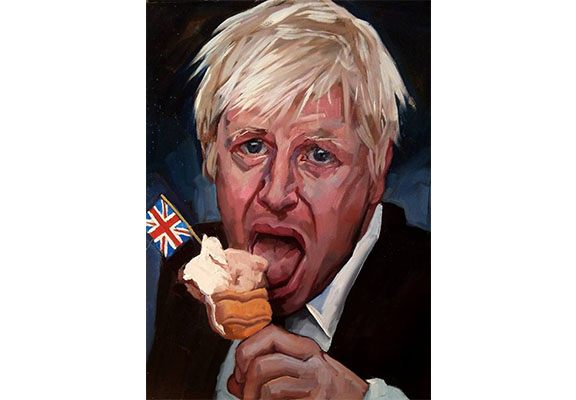 Let’s be honest, everyone loves to take a drink after a hard day, but what can be even more refreshing is definitely good ice cream.

United Kingdom is certainly popular for its good ice cream, and Boris likes to use every opportunity to sweeten up.

The biggest war that modern humanity has experienced is certainly the war against Coronavirus, and the real UK warrior against it was Boris Johnson.

Some of his preventive measures were maybe not liked by many, but they definitely maintained stability in the country. 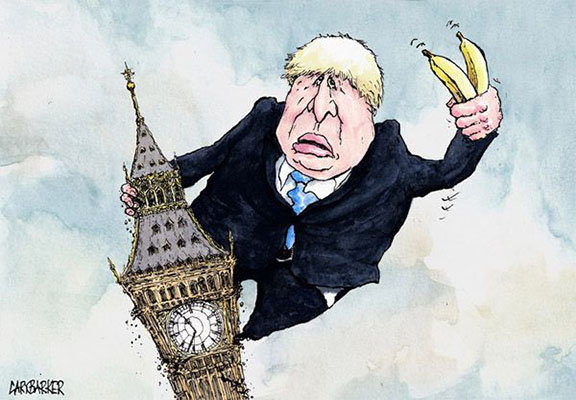 If Boris is known for anything, it is definitely for his strange statements which were often controversial and could cost him his career.

The strangest statement is definitely the one about bananas, which made Johnson feel like King Kong.

9. From London With Love by Helen Thompson 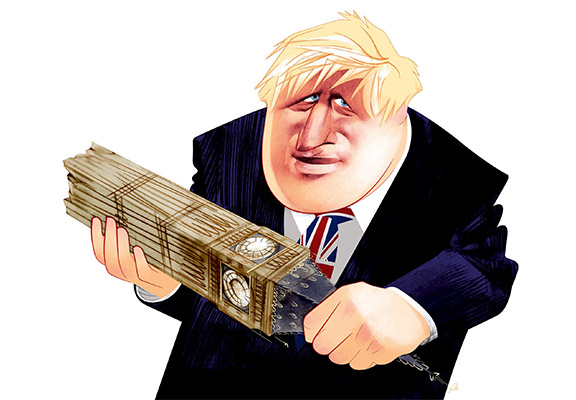 Johnson and London have a special connection. As a mayor of London, he was very successful and was loved by many which helped him become the Prime Minister of the United Kingdom.

Many people who voted for him are wondering if he betrayed their trust or not - which was called into question after Brexit and numerous outbursts. 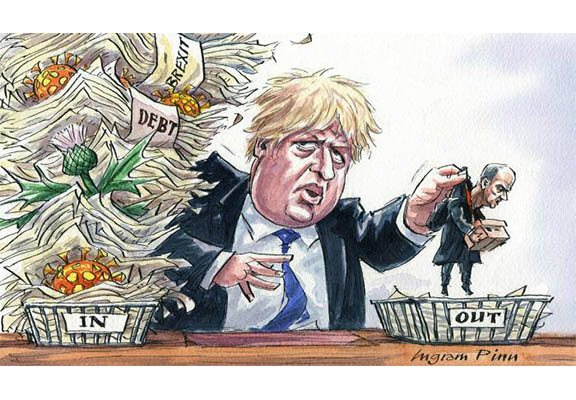 It is not easy to be the Prime Minister of the country nowadays, especially the prime minister of United Kingdom when you have problems such as Coronavirus, Brexit, debts etc.

In such situations, you can try to solve problems by removing the chief adviser, as Boris did - the only question is how much it's really solved his problems. 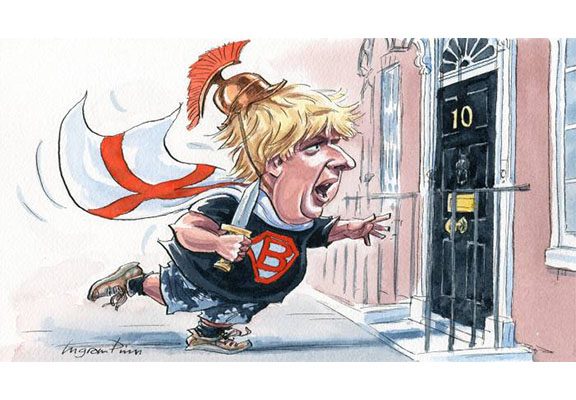 Boris is the leader of the conservative party and since he had been involved in politics, he had mostly fought for national interests.

His entry into Downing Street is characterized as "an English warrior fighting for the throne".

These were some of the most hilarious caricatures of a funny British Prime Minister. Hope you enjoyed them and they made your day.

If you want a funny caricature for yourself or someone close to you, we suggest you take a look at our ordering page.